The British music industry is one of the hottest markets right now.

With audio streaming consumption and music exports reaching new highs during the Covid-19 pandemic, the U.K. has positioned itself as one of the top markets in the world to run a music business in 2021.

During the past year, we’ve seen the eruption of the British music industry overseas. In fact, the U.K. has overtaken Germany as Europe’s largest music market. And the future looks really bright!

Keep reading to find out the current trends, Top streaming services, business opportunities, and other industry insights about the British music market.

Music consumption in the U.K.: The explosion of audio streaming

One of the few positive aspects the pandemic has brought to the global recorded music market is that streaming has turned up the beat for this industry, projecting its digital revenues to new levels.

In spite of the live scene being almost non-existent, countries like the U.K. have experienced an impressive revenue growth thanks to music streaming.

The British music industry saw a 3.8% increase in earnings during last year.

Recorded music revenues in the U.K. reached a total of £1.118 billion during 2020. This included streaming and other formats.

This made the U.K. to keep its position as the world’s third biggest music market by revenue for the sixth consecutive year, according to the last report by the IFPI. 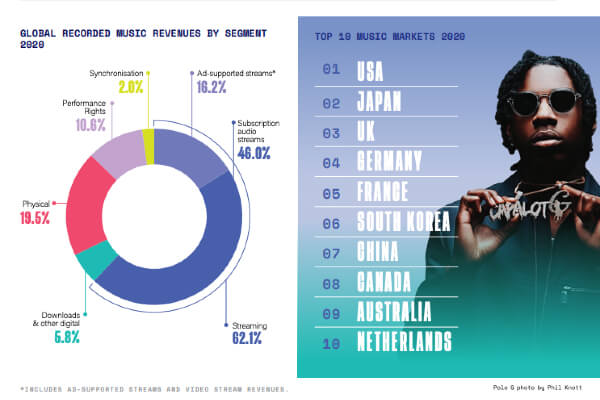 The annual “All About the Music 2021” yearbook by the BPI, the association representing the country’s recorded sector, also shows that the increase of music consumption has been mainly fuelled by online streaming and digital purchases.

The switch to the digital world has been so transcendental in the U.K. that nowadays streaming accounts for 80% of the country’s music consumption.

Worldwide known artists like Harry Styles, Dua Lipa or Coldplay ended the year getting hundreds of millions of streams on digital platforms, but emerging local talents also played a key role to put British indie music on the map.

By the end of 2020, there were 139 billion audio streams. Nearly 200 U.K. artists managed to get their music streamed over 100 million times.

While physical sales slightly decreased by 2.6% to £210 million in 2020, the impact wasn’t that extreme.

The reason behind this is simple: independent music retailers and suppliers moved their activity to the online world in order to reduce financial losses.

One of the music trends occurring during the past year in the U.K. was the renaissance of vinyl records.

This type of format came back as a headliner after nearly 30 years of being a supporting act.

This success came from the digital campaigns created for the occasion, but also from users’ nostalgia for vinyls, which resurged during the pandemic. 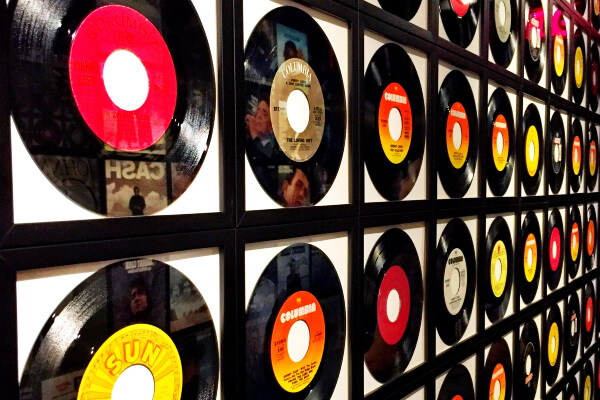 Distributing your catalog to the most popular streaming platforms is a fantastic way to make your artists known worldwide.

>> Deliver your music catalog to the best DSPs in the U.K. and worldwide with SonoSuite <<

To expand your music business as a record label or music publishing company, it’s important to consider things like investing in marketing and promoting new talents.

The British music market offers plenty of opportunities in that sense. In fact, the U.K. currently is the country that invests the most in talent scouting and artistic development.

Adding that to marketing investments used by labels to unlock the potential of new and already signed artists, the figure came to £428 million, which represented 40% of that year’s industry revenues.

As an example, we find the London-based music firm, Instrumental, which now is partly backed-up by Tencent Music (channel integrated in SonoSuite).

The music scouting platform launched a £10 million fund last November to support independent artists who currently use their services.

The consolidation of independent music and British indie labels

During the past year, we’ve seen a few British mainstream artists like Ed Sheeran, Calvin Harris or Sam Smith crossing barriers, dominating the airwaves and taking, once again, the top spots in international charts.

However, looking at how the local music market has been performing for the past year, it’s clear that independent British acts and labels do also have a voice, and it’s an influential one!

It’s obvious that British independent music is in good shape.

New figures collected by the BPI and the Association of Independent Music (AIM) reveal that the independent scene, which features British indie labels and artists, made up 26% of music consumption in the U.K. in 2020.

Vinyl LP was the preferred format for users who listened to independent music. It accounted for 35% of sales.

This was followed by CD sales and streaming consumption, which represented 30% and 24.5% respectively.

The paradigm of music streaming in the U.K.

The British music streaming industry has been in the spotlight many times during the past 10 years due to some controversial issues like, for example, music piracy.

Before the pandemic, the usage of illegal music download programs was really widespread amongst the British society, as shown in a report created by PRS and Incopro.

These platforms accounted for the 80% of the Top 50 sites infringing on music copyrights in the U.K, and during the period between 2016 to 2019, the use of stream-ripping sites rose by 1390%.

Luckily and despite public torrenting sites being the new threat, illegal music streams globally decreased during the coronavirus pandemic, including the U.K.

Music piracy behavior in the U.K. went down to 5.84% during the Covid-19 lockdown in March.

When stay-at-home protocols were established, British music lovers turned their attention to legitimate streaming services like Spotify, Apple Music or Tidal, and some even paid for Premium subscriptions to extend their experiences.

Throughout this time, bodies like PRS have been also fighting against music piracy. Since its release in 2016, PRS has been over watching and tracking links to infringing websites including unlicensed music.

The association has forced over 1,300 infringing sites to cease activity. So far, it has also reported over 6.7 million URLs with portals hosting PRS for Music repertoire.

This is good news as it marks a new era for the streaming sector, where music piracy may be easily prosecuted and tackled.

We offer music businesses the opportunity to get control of their digital distribution, which goes through a Quality Control process that ensures content is compliant with DSP’s guidelines and reduces fraud and copyright infringement.

>> Contact our music business experts to find out more about SonoSuite <<

The current streaming royalties model has also been in the public debate for a while.

This campaign seeks a response to adapt the current law regarding royalties paid from certain streaming services.

Their goal is to roughly earn the same as when their music appears on radio stations.

The debate continues as the British Parliament looks into the streaming industry and tries to find a solution on how money generated is fairly distributed between all parties.

That’s clear is that music streaming has been core to democratize the global music landscape and is helping both mainstream and independent artists, labels, publishers and distributors in Britain to connect with audiences they probably won’t reach by any other means.

There’s no doubt that the U.K. is an exceptional place to take music to the next level, whether it’s mainstream music or independent, or if it’s distributed through physical or digital channels.