Last week we talked about YouTube’s Q1 results, now it is time to take a look into Spotify. During this time of year, the music industry is very attentive on streaming services quarterly filings. However, this first quarter of 2020 is of particular interest considering the effects the COVID-19 pandemic has had in streaming consumption, habits and overall revenue generated.

However, it is important to mention that, similar to YouTube, advertising revenue decreased considerably in this quarter, specially during the last three weeks of March. Moving from €217 million to €148 million, it is a significant 32% decrease in quarterly revenue, something that directly impacts the final amount to be paid to rights-holders. Overall, Spotify’s results were turning out as expected in forecasts. The sudden drop in advertising revenue is explained by advertisers pushing back due to booking cancellations and general cuts in spend from programmatic buyers.

Lastly, perhaps the most important metric from rights-holders point of view, ARPU, also saw a 6% decrease in this quarter. Spotify explains this as a consequence of “continuation of longer free trials rolling over from Q4 and additional intake during Q1. Excluding the impact of Trials & Campaigns, ARPU would have declined 4% Y/Y as a result of continued mix shifts in product and geography”. 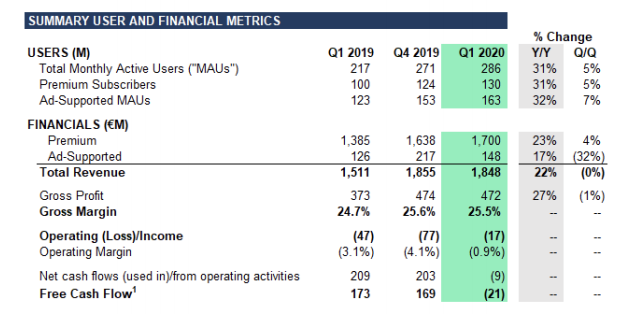 Regardless of the immediate impact the pandemic has had on Spotify’s figures –which seems low compared to the live sector –, there is still the uncertainty about the long term consequences that the lockdown will have on both advertisers and streaming users.

Users and companies facing considerable disruptions in their cash flow and income could continue to cut back on Spotify spend until they manage to get back on track financially, and Spotify’s ARPU evolution will largely depend on the conversion of those free trial users into premium subscriptions during times of financial crisis.

RELEASE STRATEGIES DURING THE PANDEMIC

Several planned releases have been cancelled or postponed due to COVID-19, specially those that had touring as a main component in the marketing strategy. Now, labels are being forced to reimagine their strategies and go 100% digital. TikTok, Instagram and Facebook Live, Twitch, Dice and many more companies have quickly stepped up to provide digital solutions for the live sector.

In a recent interview with MusicAlly, Spotify’s CEO Daniel Ek  stated “[I think] some people in the music industry falsely assumed this would be a bad time to release music. I think this might be a much better time to release music,” taking Dua Lipa and The Weekend as examples of artists experiencing record numbers after releasing during lockdown. And he might be right. The latest release of Nielsen Music/MRC Data survey on the impact of COVID-19 on the entertainment landscape states that 53% of surveyed fans said they are listening to new music from artists they already know, while 43% say they are listening to new music from artists they never heard from before. The latter percentage represents a 4 percentage point gain from the second release of the survey, which scored 39% two weeks before the current release.

At SonoSuite we have seen a constant increase on delivered catalog though our platform since lockdown measures took place around the world. Join the revolution of independent music companies taking control of their digital supply chain, pursuing maximum margins through flexibility in business model and top of the line human support. All under their all brand.

by SonoSuite
May 27
-
Market focus