Music streaming services are shaping the most important changes in the industry, to the point of living a second digital music revolution.

When the IFPI Global Music Report 2019 was published, all headlines remarked one word, the term that is changing everything; not only in the music industry but also in the whole entertainment sector: streaming. According to the document, the global music recorded market grew by 9.7% in 2018 and 37% of revenues came from paid streaming services. This trend is expected to evolve in the next years…But how? Is streaming the lifejacket that the music industry needed to survive to the crisis it’s been immersed in the last two decades?

One thing is true, the future of streaming services is promising Goldman Sachs analyst Lisa Yang forecasts that the whole music industry will account for $131 billion by 2030. The recorded music industry will represent $41 billion of these earnings thanks largely to the growth of streaming, so it will generate $34 billion of that, from which $28 billion will come from paid subscription and $6 billion from ad-supported streaming services.

Millennials have the power

Let’s get back to 2019. Currently, music streaming sales are dominated by top R&B and hip-hop artists, such as Drake (the most played artist in Spotify last year), Kendrick Lamar or Cardi B. Millennials and Centennials are the two generations helping to revitalize the industry. On the one hand, they spend on music more money than other age groups. Also, they are the ones streaming more music on their smartphones. According to Goldman Sachs predictions, the proportion of people streaming music in their devices will evolve from 18% to 37% in 2030 in developed markets and from 3% to 10% in emerging ones. 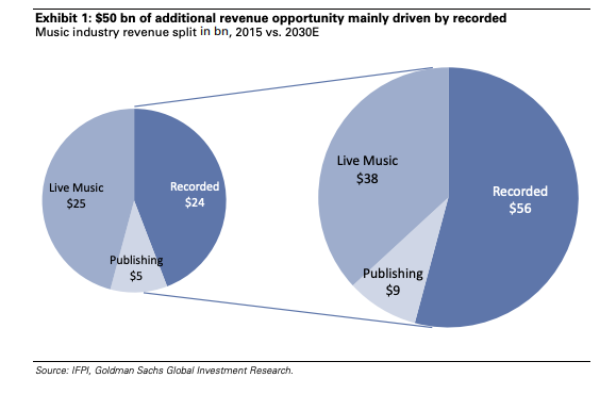 Experts, professionals and technology companies and giants have their eyes on Latin American countries or India. Why would YouTube Music, Pandora, Amazon or Spotify have so much interest in these regions? Because of their potential and the fact that streaming is making us more glocalized.

In our post about the trends that will shape the music industry in the next decade, we also mention that this rise of streaming comes with more pressure in catalogues-the more indie and local, the better. Such is the case of Boomplay in Africa; value chain disruption-that is, independent music labels creating their own streaming services or streaming services signing artists, the rise of playlists above albums, the synchronization with Google Assistant, Alexa, Siri or Cortana smart speakers.

When Spotify beat the stock market, Business Inside leaked a letter written by David Fiszel, one of the platform investors, explaining that the streaming business model is expected to grow indefinitely, as well as being the future of music distribution. By now, it is also altering the whole music creation and monetization process… which are not a walk in the park precisely.

Streaming revenues may not grow so drastically as predicted by Goldman Sachs. MIDiA Research 2018-2026 Streaming Music Forecasts states that 2018 has been the last year of considerable growth in streaming revenues. From this year and on, they will drop from 29% to 7% in 2026, especially in mature markets like the US, Australia or the United Kingdom. Moreover, the US and the UK will still dominate the streaming market, though emerging countries like Brazil, Mexico or India will scale to the top 15 positions.

So, the answer to the headline’s question is yes, we are living an unstoppable revolution in the music industry and streaming is the gasoline impulsing it. A picture is worth a thousand words so here you can see an example to illustrate this declaration. 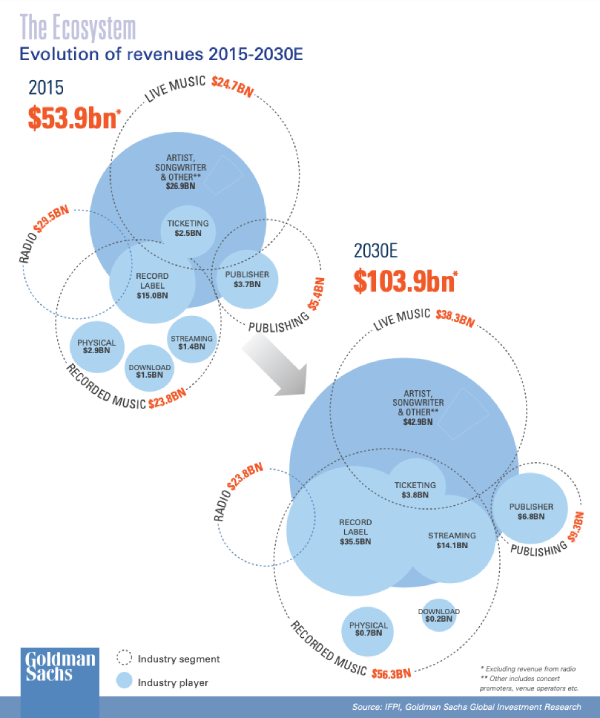